On the second day of our Shimanami Kaidō trip we visited Ōkunoshima, also known as the ‘rabbit island’. The landlady at Sawaki was kind enough to find us a time-table for the ferry that’s departing from a port on Omishima. There was a ferry leaving at around 10 o clock and we were told that it would take around 1 hour on bicycle so we left around 8:45. We made it just in time!

It was already incredibly hot outside and a blue haze shrouded all the islands in the distance. With the blue sky and the almost green water, it was very beautiful. After a short trip with the ferry we arrived at Ōkunoshima and was immediately greeted by a lot of bunnies! They didn’t seem the least bit scared as they approached us and the many children, looking for food. The children, and their parents, had come prepared and started handing out carrots and lettuce. We hadn’t prepare anything because I had heard/read that you could buy bunny food on the island. That was NOT true. Our first stop was the visitor’s centre in search of some food we could buy. With some very basic Japanese combined with English, I tried to explain that we wanted to pay for bunny food. Unfortunately my first attempt failed as they tried to explain that “we don’t eat the bunnies here”. Oh the horror! :) After making my most horrified face and explaining that “no, no, I love bunnies!”, they understood that we wanted to feed them instead of having them on the dinner table. They took us out the back and handed me a huge bouquet of bamboo for free. The man said that they didn’t really sell any rabbit food but that I could feed the bamboo to the little critters. 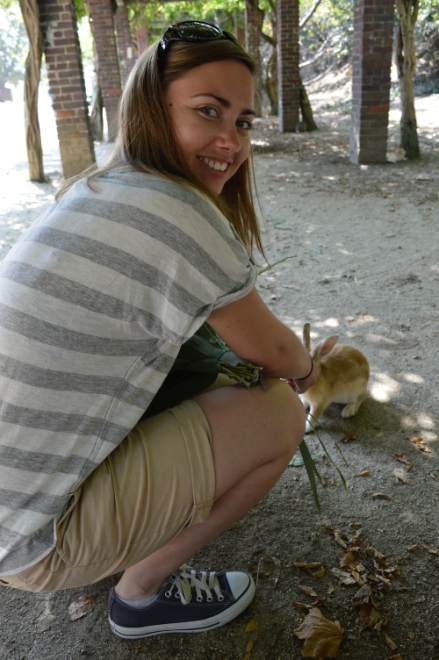 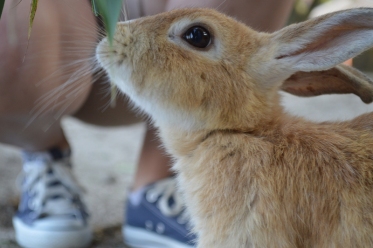 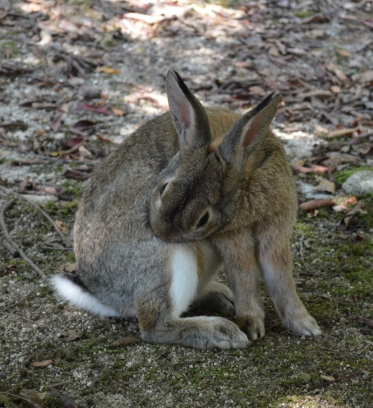 I had a bunny like this one when I was younger! 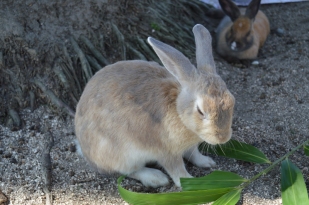 Before we went on a tour around the island we decided to visit the local museum just next door. Ōkunoshima isn’t famous only for its many rabbits but also for its poison gas factory during World War II. Most of the information is in Japanese but there are some short descriptions in English that provides visitors with the most important information. When the allied Occupation Forces disposed of the toxic gas, they also destroyed many of the buildings but the ruins still remain.

Ruins of the poison gas storehouse

The island is quite small and you can find ruins from the factory almost everywhere. From the tennis courts, a small trail leads up into the ‘woods’ and up on the mountain. Feeling a bit adventurous, we decided to go for a small hike. Right at the entrance we saw something in the bushes, a tiny snake! “Oh, I wonder if it was poisonous” I said as it quickly crawled away from us. Then we turned to the trail only to see the huge spider webs hanging over the path. By this time we’ve gotten quite used to seeing the ~10cm large black and yellow spiders. This time, however, an even bigger red/black spider was greeting us. Feeling a bit nervous about this new colour of the spider, I bent down and quickly sneaked passed it under its web. My husband was quite uncomfortable on our way through the forest. Why you ask? Well, the spiders have all adapted their webs to the hight of Japanese people. This means that Japanese and short westerners such as myself can pass under the webs without much effort. My husband on the other hand will end up with a facing-hugging spider if he doesn’t crouch :)

Above the trees, the view was absolutely amazing! Because of the heat (now probably around 35°C), we didn’t linger for too long but continued on the path. With the low fern like bushes, it felt a bit like we were in a Jurassic Park movie. Only difference was that instead of velociraptors, there were rabbits. Suddenly we came across some suzumebachi and the reference to Jurassic Park got a little bit too real. Just the body on this giant hornet is ~5cm! To my knowledge they’re not the most friendly creatures and getting stung by one can actually kill you. With this in mind, we bravely advanced in the direction we came from. When we were almost out from the spider infested woods, we passed a mother and daughter feeding a rabbit. Then we saw it, a huge snake! And when I say huge, I mean huge. It was at least as long as I am tall (1,6m). I alerted the mother who picked up her daughter and the four of us went out of the woods while making as much noise as possible. Who knew a trip to the rabbit island would be this exciting? :) 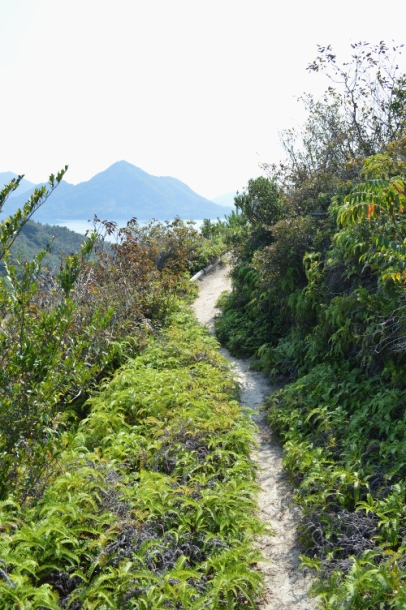